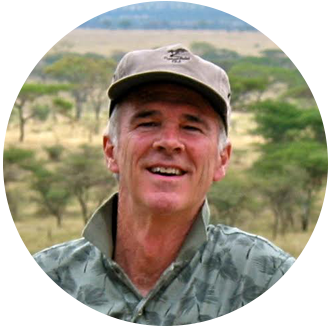 For 20 years, Bill was the Assistant Dean & Director for UCLA Continuing Education where he taught advanced courses to dentists throughout the U.S., Europe, and Asia. He retired from UCLA in 2013.

After receiving his DDS degree, Bill served as a dental officer in the U.S. Air Force for two years in Japan. It was after his service overseas that he fulfilled a childhood dream to visit Africa. He spent four months traveling throughout Kenya and Tanzania — an experience that was life changing. Now, Bill and his wife Eva dedicate much of their time to supporting the places and cultures they love. Each year, they host ACC US’s custom safaris to Tanzania. 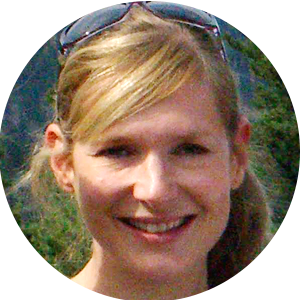 Carolyn’s passion for the people and wildlife in Kenya began after college when she spent four months working with Stefano Cheli and Liz Peacock of Cheli and Peacock Safaris. At this time she also met Dr. David Western of the African Conservation Centre and his wife Dr. Shirley Strum. These four people and the experience of Kenya changed her life: she returned to graduate school at the University of Denver to pursue her Master’s degree in Environmental Policy and Natural Resource Management. 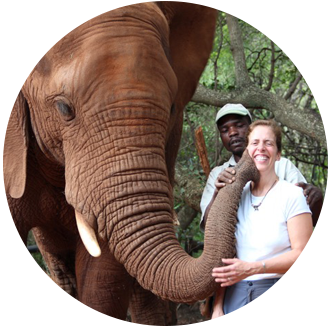 Jacquie began her affiliation with ACC in 2014 when she committed funds from her Fair Trade business, Zimbu Trading LLC to support ACC conservation programs.  She established Zimbu Trading in 2012 to support the craft of African beaders (particularly in beaded animals) by broadening their access to foreign markets as well as to support selected animal conservation programs in an effort to educate her customers about the challenges that wild animals face.

Though her passion is animal and environmental conservation, Jacquie’s day job for the past 30+ years has been international development finance (for the past 10+ years focusing on renewable energy and energy conservation), working in the World Bank/International Finance Corporation and for the German Development Bank (KfW), among others.  Jacquie has worked and traveled extensively throughout the world, especially in Latin America (primarily Brazil and Mexico) and Africa (Kenya, Tanzania, Zimbabwe, South Africa, Lesotho, Senegal, Niger, Sudan, Morocco) and lived a number of times overseas including South Africa in 2012 while she helped launch a Renewable Energy and Energy Efficiency Credit line with IDC (South Africa’s Industrial Development Corporation). Jacquie has an MBA from Wharton concentrating on International Finance, an MS from Michigan in Resource Economics focusing on Water Economics and a BA from Wesleyan University majoring in Geology. 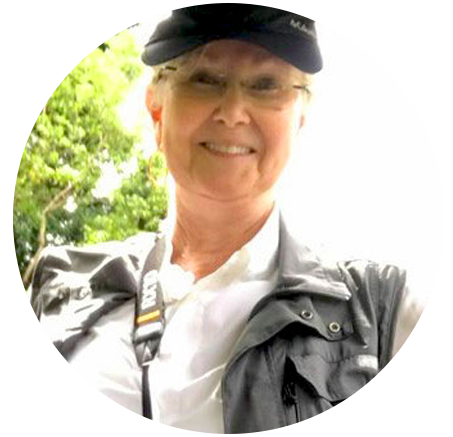 Since Kathy was a child, she has dreamed of going to Africa. Her dream finally became a reality in May 2018 when she traveled to Tanzania for the first time with Bill and Eva. The experience was everything she had ever dreamed of and more. She came away wanting to support efforts to conserve the wonders of nature in Eastern Africa.

Kathy is a mostly retired cardiologist. After being a nurse for 13 years, she attended Tulane University Medical School from 1986-1990. She trained in Internal Medicine, Cardiovascular Diseases, and Advanced Heart Failure/Transplant at Oregon Health and Science University (OHSU) in Portland, Oregon from 1990-1996. She stayed on at OHSU as faculty, but in 2003 she was recruited as a Cardiovascular and Heart Failure specialist by Northwest Kaiser Permanente (NWKP). In 2006 she became the Chief of Cardiology, followed in 2009 Director of Cardiovascular Services, and in 2011 Chief Medical Officer. She retired from NWKP in 2015 and since then has done global health work with a focus on cardiovascular medicine in Myanmar and Ethiopia. 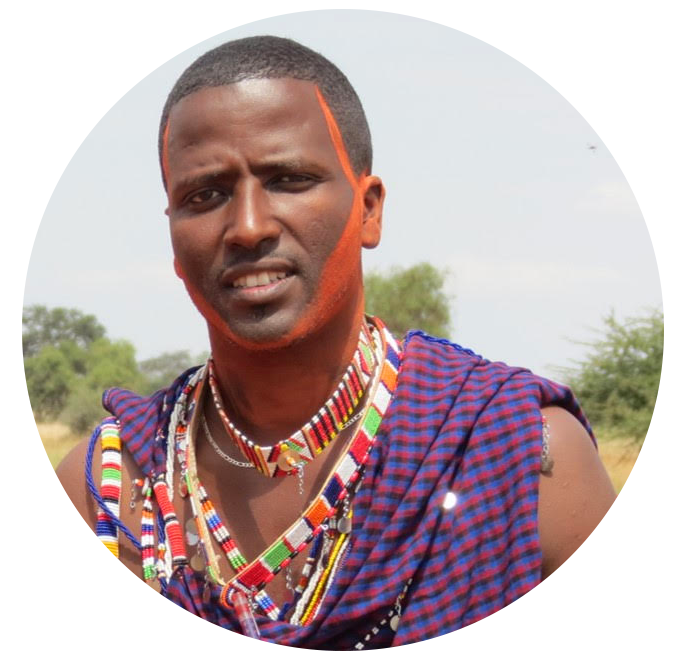 Jacob is a Data Scientist for Strategic Analysis in the Office of Analytics & Institutional Effectiveness at Virginia Polytechnic Institute and State University (Virginia Tech). His role includes among others identifying and developing research and analytical studies for university leadership to address medium to long-term issues facing the university, especially in faculty and staff related areas.

Besides being born and brought up in an environment where people freely co-existed with wildlife, Jacob has also worked in wildlife conservation fields for a number of years. Prior to relocating to the United States, Jacob spent 6 years working as a field research assistant for a USAID funded project through International Livestock Research Institute (ILRI) and Colorado State University in the Greater Amboseli Ecosystem (GAE) and later worked for Living with Lions. Jacob played a significant role in the formation of Lion Guardians — a separate conservation organization also present in the same region, before heading to the U.S. to further his studies.

As part of his graduate thesis work, Jacob co-invented and piloted a
systems-based and culturally-relevant board game simulator called ERAMAT. Derived from the Maasai word Eramatare (holistic management), ERAMAT acts as both a problem solving and a learning tool to pastoralists and non- pastoralists alike, by helping people understand the problems and sustainability issues that pastoral cultures face. ERAMAT provides an alternative to a computer-based simulator, and hence provides a culturally credible simulation of the system dynamics associated with an accelerating boom/bust cycle of drought and hunger in the region.

Jacob holds a B.S. in Geographic Science, with a double concentration in Applied Geographic Information Systems (AGIS) and Environmental Conservation and Sustainable Development (ECSD), and a M.S. in Integrated Science and Technology, both from James Madison University, Harrisonburg, Virginia. 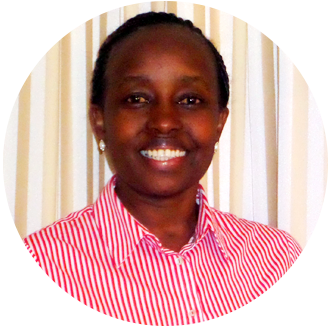 Lucy has been working with the African Conservation Centre (ACC) for more than 20 years as the Data analyst, GIS analyst and ICT Officer, Head of Programs and Deputy Director. In these roles she has developed an ecological database system, GIS maps on species densities and distribution, spatial and statistical analytical tools in support of PhD students doing research in Aberdares National Park, Lake Nakuru National Park, Nairobi National Park, Athi Kapiti plains and the Amboseli ecosystem. She was appointed Executive Director of African Conservation Centre in July of 2012.

Lucy has had long interest in the management and interpretation of biological and environmental data for decision-making and informing initiatives that enhance local livelihoods in rich biodiversity areas. She is part of a regional effort in East Africa that is seeking to develop a framework for the mobilization of biodiversity information for the sustainable management of natural resources. She is the current chair and a founding member of the Society for Conservation GIS, Kenya Chapter and a member of the Society for Conservation Int’l Board of Directors. Lucy holds a BSc in Computer Science and Statistics from University of Nairobi and an MSc. in Geographic Information Systems (GIS) from Manchester Metropolitan University (UK). 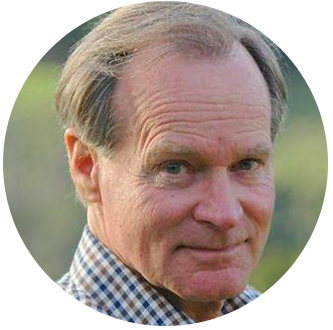 David Western is chairman of the African Conservation Centre, Nairobi. He began research into savannas ecosystems at Amboseli in 1967, looking at the interactions of humans and wildlife. His work, unbroken since then, has served as a barometer of changes in the savannas and a test of conservation solutions based on the coexistence of people and wildlife.

Western directed Wildlife Conservation Society programs internationally, established Kenya’s Wildlife Planning Unit, chaired the African Elephant and Rhino Specialist Group, and was founding president of The International Ecotourism Society, chairman of the Wildlife Clubs of Kenya, director of Kenya Wildlife Service and founder of the African Conservation Centre in Nairobi. He is an adjunct professor in Biology at the University of California, San Diego and the University of Minnesota.

Western’s publications include Conservation for the Twenty-first Century (OUP, 1989), Natural Connections: Perspectives in Community-based Conservation (Island Press, 1994), In the Dust of Kilimanjaro (Shearwater, 2001), Kenya’s Natural Capital: A Biodiversity Atlas of Kenya (2014). He is presently directing conservation and research projects in Kenya and serving on a government task force redrafting environmental legislation in line with the new Constitution of Kenya 2010. Western received the World Ecology Award for 2010 and the 2012 Life-time Achievement Award for Ecotourism.