In an age of globalization and increasing cultural homogeneity, a young generation of Maasai is seeking out its cultural roots and a sense of identity. The ground swell of interest is timely, but the task of recovering a fading heritage is daunting…

It calls for galvanizing communities scattered across the Rift Valley in Kenya, gathering a wealth of cultural practices and knowledge, and creating an awareness of traditions and their meaning, It also calls for institutions to perpetuate Maasai heritage and build capacity to harness the potential of Maasai knowledge, skills and art.

One way of highlighting the problems of cultural erosion and the benefits of common identity is to draw on the experience of the Navajo or Diné as they call themselves. The Navajo of the Southwestern United States are icons of native America and world renowned, like the Maasai. And like the Maasai, the Navajo have a rich distinctive culture that faced the same threats from westernization, cultural erosion and commercial exploitation. Against great odds, the Navajo preserved their traditions, recaptured artisanal skills and rekindled a sense of pride in their dress, ceremonies, basketry, beadwork, music, art and the environment. 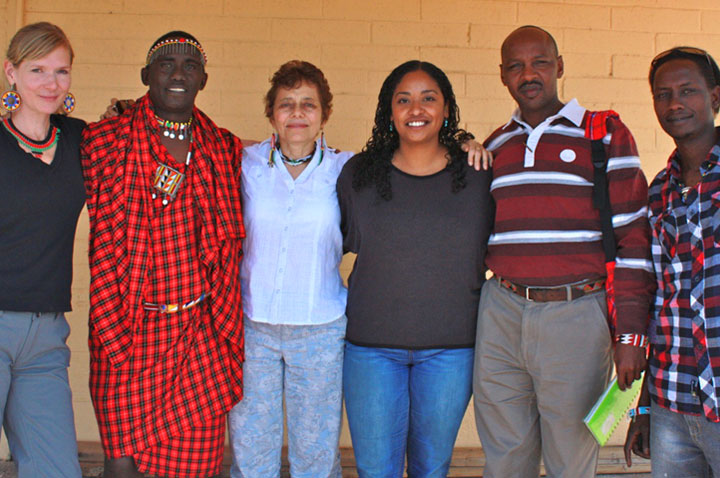 To discover how the Navajo maintain and celebrate their cultural heritage, three Maasai (Joshua Kirrinkol, Michael Tiampati, John Kimanga), an anthropologist (Debbie Manzolillo Nightingale), and a representative of African Conservation Fund, (Carolyn Greene) traveled together as part of a Maasai Cultural Heritage program planning team managed by John Kamanga of the South Rift Association of Landowners in Kenya. The team set out to gather ideas and advice as they begin plans for a Maasai Cultural Heritage Festival and an interactive Maasai Cultural Heritage Center that will house Maasai artifacts and serve as a community gathering place. This week long adventure (August 3-10) started with a visit to the Museum of Northern Arizona’s 63rd Annual Navajo Festival of Arts and Culture in Flagstaff. We then spent four days visiting with Navajo artists, pastoralists, spiritual leaders, an environmental group, and schools throughout the Navajo Nation to learn about some of the ways the Navajo are maintaining their cultural heritage in a changing world.

To learn about how the Navajo and other Native Americans market and brand their art, we met with Tony Eriacho, President of the Council for Indian Arts and Culture and inlaid jewelry artist. Tony talked with us about the complications of protecting Native art from pirating and how to brand and market art. 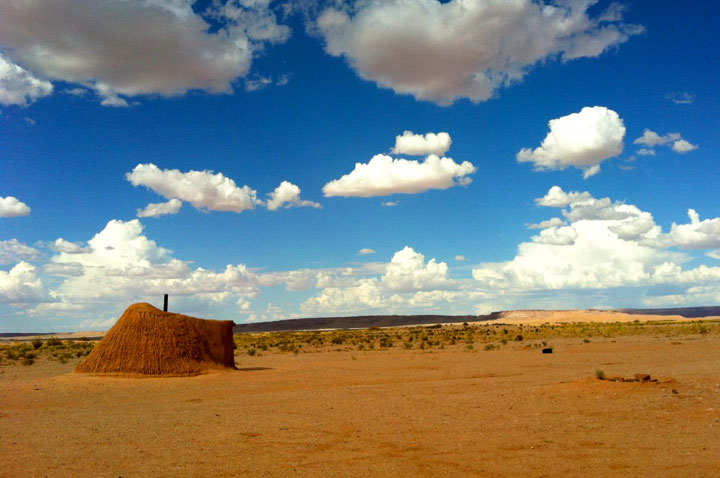 Evening found us in the desert near Cameron at an 80 year-old Hogan (traditional cone-shaped home) and family gathering place owned by Floyd and Mae Stevens. The group enjoyed a wonderful beef dinner cooked over hot coals in the ground. James and Mae Peshlakai and many friends and family shared traditional dances, songs, flute and drum playing. We also learned about how a young Navajo girl is fighting for the future of her culture by taking a stand against officials regarding climate change. We shared gifts, told stories, and laughed long into the night. We slept under the stars and in the Hogan and could not help but feel we were in Kenya. 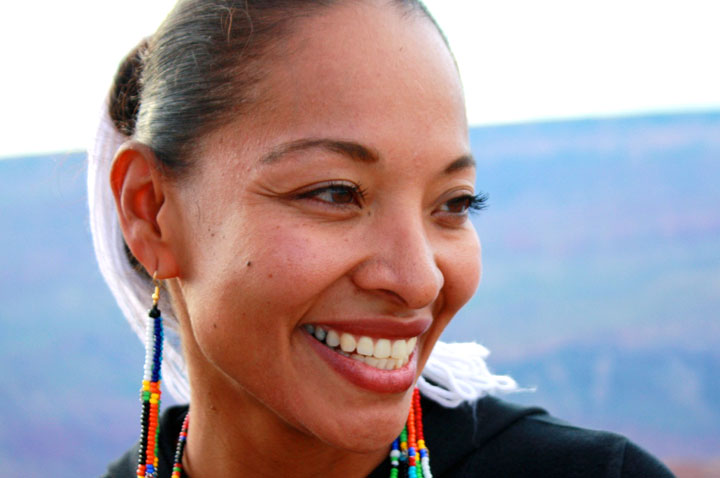 Back in Flagstaff, Radmilla Cody—a former Miss Navajo Nation, renowned singer, and an advocate against domestic violence—spoke with us about the Miss Navajo Nation pageant and how it might be something to model in Kenya to support an interest in cultural heritage by younger people. This pageant is not a beauty pageant. Rather, it honors young women who have embraced their culture. Contestants are required to be unmarried, over 18 years of age, a high school graduate, and able to speak the Navajo language. They compete in activities such as: answering questions about traditional and modern Navajo customs (with questions in both Navajo and English), sheep butchering, and performing a contemporary Navajo cultural talent. Winners are paid ambassadors for the Navajo people at events all over the world. The pageant is held annually and the winner is crowned during the Navajo Fair held in Window Rock, Arizona. 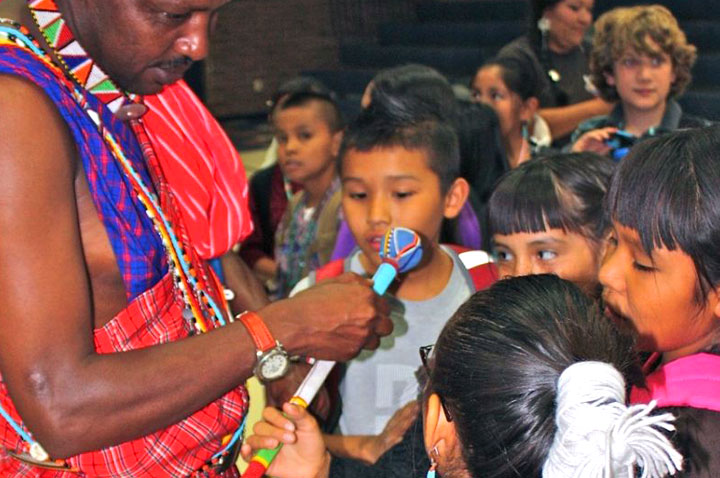 Our next stops were at two elementary schools: the STAR School just outside of Flagstaff and the Leupp Public School. The STAR School is a charter elementary school serving students in pre-school through 8th grade. It won the U.S. Department of Education Green Ribbon award in 2012 and is the first off grid, solar/wind powered charter school in the country. Dr. Mark Sorenson, founder and President of the school, talked with the team about how the school incorporates traditional Navajo practices into the curriculum and daily life of students. In addition to teaching Navajo language, he was especially proud of incorporating core values called the 4Rs that come from traditional Navajo dispute resolution.

The Leupp Public School was equally impressive. This school serves children from Pre-K to 5th grade. Mary Jo Eldridge gave us a tour of the school and showed the team how they balance teaching traditional Navajo language and culture with a modern curriculum.

All this information will be so helpful as the Maasai consider ways to incorporate culture and tradition into their own educational system. The Maasai team members shared stories with the children of each school and answered their many questions about life as a Maasai warrior. 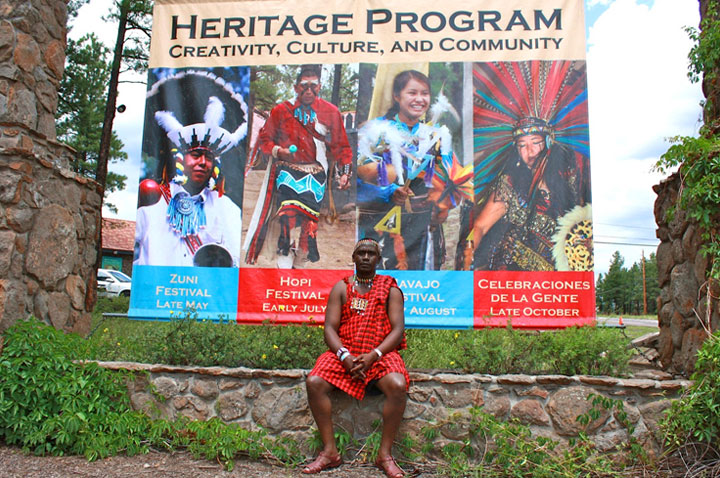 The Museum of Northern Arizona’s Navajo Festival gathers artists, musicians, dancers, and cultural interpreters from throughout the Navajo Nation to share the Navajo way of being. More than 4,000 visitors enjoy the festival every year. Through meetings with the director of the museum, Dr. Robert Breunig, the Heritage Program Manager Anne Doyle and Navajo exhibitors, our team gathered many ideas that will help us develop a Maasai Cultural Heritage Festival. Anne was particularly helpful in talking with us about how to put on a festival of this size and what it takes to keep it going year after year. The Maasai quickly found that while they were there to learn about the Navajo, the Navajo were equally interested in learning about the Maasai!

CULTURAL CONNECTIONS TO THE ENVIRONMENT

In Flagstaff, we also met Black Mesa Water Coalition’s executive director, Jihan Gearon, to learn about how this organization is working to build sustainable and healthy communities by preserving and protecting the earth and the integrity of Indigenous Peoples’ cultures. This group of young inter-tribal, inter-ethnic people are addressing issues of water depletion, natural resource exploitation, and health promotion within Navajo and Hopi communities. They are working to transition away from the fossil fuel economy, put in place a green economy to replace it, and ensure long-term support for a diversified, community-owned and sustainable way of life. Issues with uranium, oil, gas, and coal leases on Navajo lands have led to polluted air and land, contaminated and depleted water, and various health ailments. Our team agreed that the environment is a big part of cultural heritage. It cannot be separated from Maasai culture. It’s a part of what makes the Maasai, Maasai. Thinking progressively about sustainable practices and green opportunities needs to be a part of any cultural heritage program. 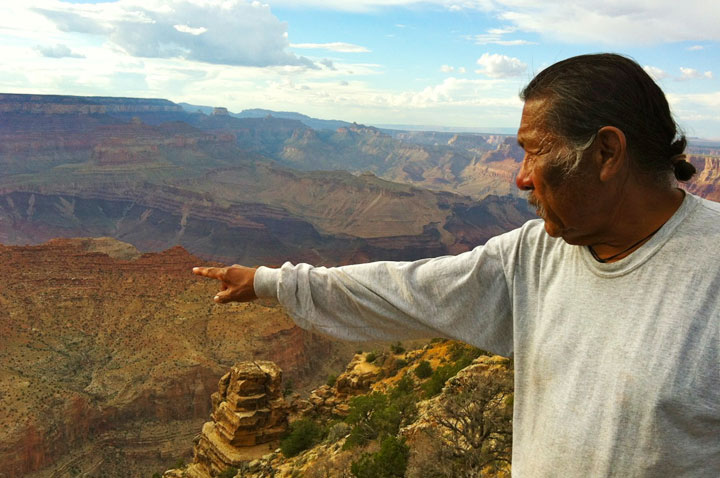 We then enjoyed a quick stop at the Grand Canyon’s East Rim with medicine man, James Peshlakai and his niece Radmilla Cody. James shared the rich history of the area with our team and its importance to the Navajo and other indigenous people in the area. The size and beauty of the canyon was breathtaking. James also spoke with us about some of the native plants and how the Navajo benefitted from them. We all enjoyed the amazing view from the Desert View Watch Tower, a 1932 replica of a prehistoric Indian tower. From here we could see the Painted Desert and the sacred San Francisco Peaks. 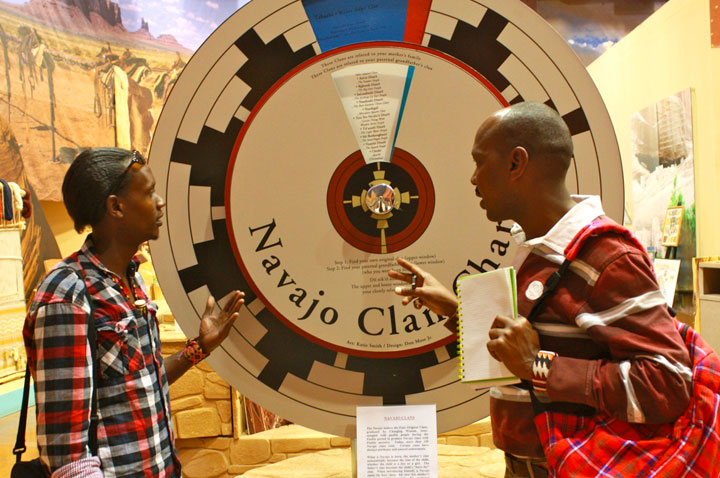 From Flagstaff, our group moved on to Tuba City to visit the Navajo Interactive Museum and Code Talker Museum where we learned more about the Navajo creation story, customs and culture. The museum served as a good example for how the Maasai might showcase aspects of their culture in a Maasai Cultural Center that is being planned. 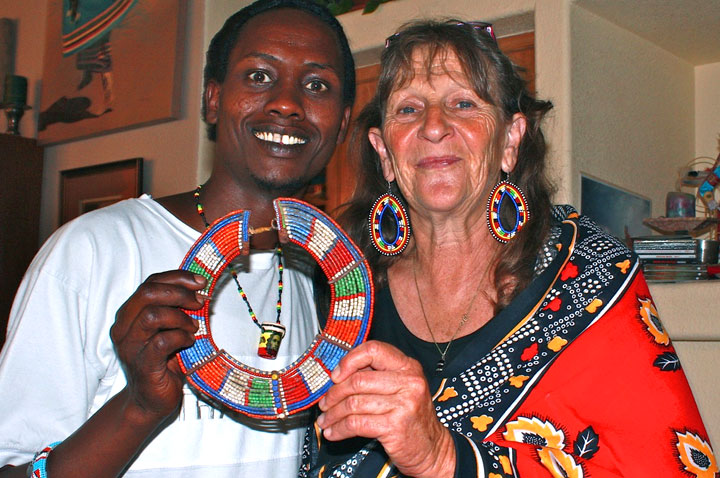 In Leupp, we also had the pleasure of meeting with Jimmy & Clara Wilson and family. This family of artists shared their beautiful pottery, weaving and jewelry with us. This family, like so many others, raises their own sheep, cleans and spins their wool, and weaves their own rugs and blankets to sell. 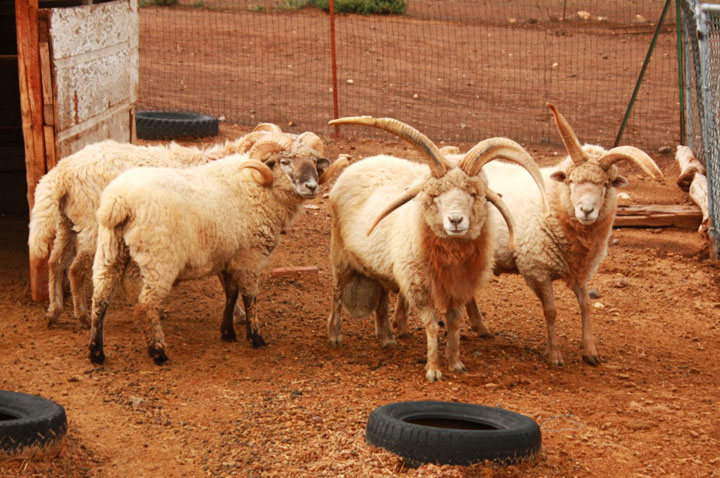 Then it was on to Hard Rocks, in the heart of the Navajo Nation, where Jay Begay and his family welcomed us to their home for the night. In addition to raising goats, Jay raises and is an advocate for Navajo-Churro sheep, a rare breed almost wiped out by the U.S. government in the 1930s. Jay and the Maasai team members enjoyed discussing their customs related to livestock management – many of which were uncanny in their similarity. We were continually surprised that these two communities from different continents were so connected in the way they care for and value livestock. Even the ceremonial and cultural practices for livestock protection were similar.

Before leaving, Jay and his family honored our team and some friends by butchering a goat (nearly identical to how Maasai butcher) and preparing a traditional, delicious meal.